Fantasia '19: Blood on Her Name Cannot Be Washed Off: A Film Review

Blood on Her Name is the feature debut of Matthew Pope. Set in the South of America, Blood on Her Name had its premiere in Montreal, at this year's Fantasia Film Festival. Self-described as a noir thriller, the film develops more as a crime thriller and mystery as plot elements are slowly revealed. Requiring some secrecy, it would be best for film fans to simply see this well executed film for themselves.

Events begin with Lee (Bethany Anne Lind) and a body. Over time, plot details, leading to a murder, are revealed. Initially, the after events of the crime are shown, followed by a look at the characters and their motivations. Lee is a mother, trying to keep her son on the right path. Lee's father, Richard (Will Patton) also plays a pivotal role as he also tries to protect his family. Eventually, the main story plays out with a few surprises along the way. Meanwhile, Lee only reveals the truth, about the body, when convenient, or when pressure forces her hand. The film's central truth is hidden beneath layers of mystery, which will entertain most audiences. 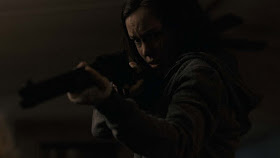 The story itself is a bit complicated. Lee's relationship with her father has been strained from an early age. Forced to see gruesome events, Lee is trying to stay on a better path, compared to her father. But, there are no easy outs for Lee, when a murder takes place in her own garage. Now, it is a race to hide evidence, with events devolving into a family feud.

The filmmakers and most of the audience were in agreement on the film's noir influences; but, this viewer saw more crime thriller than noir. While noir has some mystery elements within, this film is focused on a murder and the cover-up of that murder. Lee is constantly becoming more involved in more crimes as she tries to keep her small family together. The film's climax plays out with a shootout. And, there is little smoke, nor shadowy villains here, just strange moral choices made by Lee - the protagonist. While the filmmakers mentioned the film's genre as "film noir," or "Southern gothic," this viewer saw more influences of a well written crime thriller, or mystery.

Blood on Her Name will continue to show across North America. Hopefully, film fans will get out to see this interesting mystery, which develops into a crime thriller. The characters are interesting and so is the slow reveal of the film's central truth, involving the garage murder. In the end, you are left with an excellent look at family's trying to protect their own in very different ways.